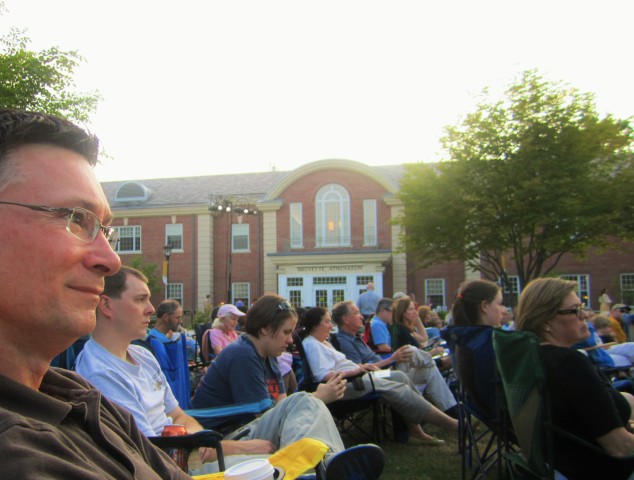 Everyone watching the show, only one person watching her phone

Saturday night, Shakespeare in the Park at the University of Saint Joseph, under the stars and an almost super moon. We saw All’s Well That Ends Well, a story of sexual innuendos, deceit, seduction, manipulation and outright lies with a happy ending.  I don’t watch them but isn’t that what all those reality shows on TV are like?

The park was packed on what was the last weekend of the performance. We ate dinner at home but people picnicked on blankets, coolers of food and bottles of wine spread out around them. Most of us brought lawn chairs so we could see over the heads of everyone in front of us. Every time the woman in front of me shifted in her seat I did the same in order to see around her. She’d move her head to the right, I’d move mine left. She’d move left, I’d go right. I slipped my sweater on about halfway through the night but if I had forgotten it at home I would have been okay. The air was just slightly cool, probably too warm for the actors in their long gowns and robes, surprisingly the bugs left me alone. 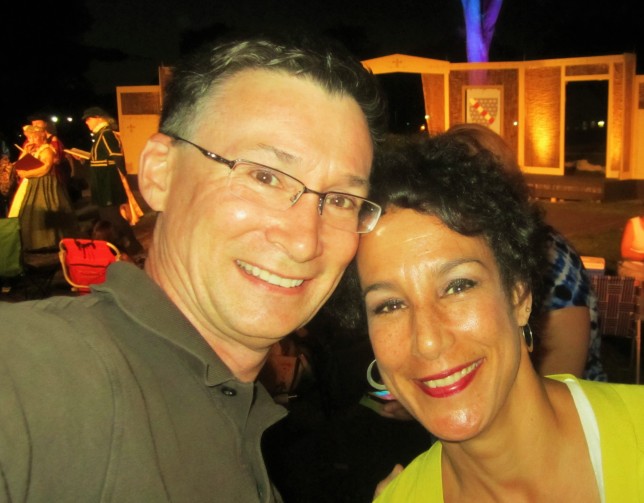 The stage is behind us

During intermission we walked around the square. I attempted to take night photos of some of the architecture; I’m not sure what all the buildings were but one was the library, stacks and rows of books visible through the windows. The moon hung in the sky above it, through the trees.

my attempt of the library

I’ve never seen this play before, was happy to read the scene synopsis included in the play-bill. Even knowing what was happening, anticipating the scene before it played out, I still missed chunks of dialogue. I got the gist of the story though and was able to follow along; I even laughed at the appropriate times. This is our third year going and I recognized many of the actors who do a great job and seem to really enjoy themselves. I have an annoying habit of wishing I had certain talents when I see someone else doing it – dancing, singing, playing the sax, making furniture, swinging a sledgehammer (I could possibly learn this skill). As I watched the actors speak their poetry-like lines I realized this could be the one time I don’t have any desire to be up on the stage delivering those words. Best to leave that to the pros!