A day to remember

I made peanut butter and jelly sandwiches while I waited for the water to boil for the french press. Bananas, Larabars and gingersnaps rounded out the lunches we would be eating at the top of Mt Monadnock. After a breakfast of eggs, toast, coffee and the last of the zucchini bread we stuffed our backpacks with our lunches, hats, gloves, jackets, filled the bladders with water and got on the road. We drove the 2 1/2 hours north, from CT through MA and VT, arriving in NH mid morning. I was concerned that we got there later than planned but pushed the thought aside, decided it didn’t matter, we weren’t on any schedule and would ascend and descend long before dark.

In the park cars filled up the dirt lot, people strapped on backpacks and milled around contemplating their route. A quick trip to the bathrooms and we started our ascent, choosing the Cascade Link Trail after a ranger told us it would be less crowded. The rock strewn path started out relatively flat; large round tree trunks, rubbed smooth from the elements, acted as stairs but soon we were hiking up. We stopped to take our jackets off, already warm. The incline, sharp in places, never leveled out for more than a few feet at a time before leading us up again. 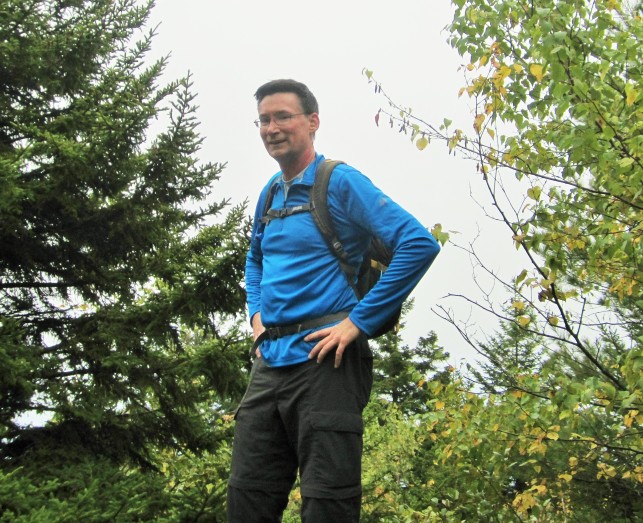 The closer we got to the top, the cooler and windier it became. Hiking above the tree line, wrapped in fog and moisture, lent an eeriness to the landscape. At woman taking pictures of her daughter and friends said “you guys look like you’re on the moon.” We stopped to put our jackets and glove liners on before reaching the summit.

Still some green on the mountain

No sooner had we reached the top, found a little enclave protecting us from the wind so we could eat our lunch, when a ranger approached to tell us the summit was closed.

“Visibility is poor,” she said, “and the winds are blowing up to 50 mph. We want everyone to be safe.” She told us to finish our lunch, touch the marker and start to head down. She gave us five minutes. 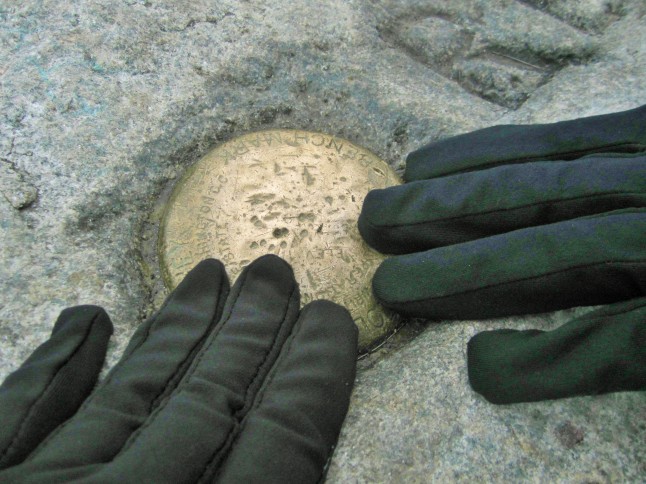 The winds kept pushing us around; it was exhilarating and, honestly, a tiny bit scary. Bill even stumbled once after getting caught up in a gust. We headed down the White Cross trail along with everyone else, it seemed. By the time we descended a couple of hundred feet from the top the winds abruptly stopped. I peeled off my gloves and jacket, stuffed them back into my pack. The rangers had asked us to let hikers on their way to the top know that the summit was closed. It must have been hard for them to understand since the air was perfectly still where we now stood.

This way to the top

Wet rocks made parts of the trail slippery. A steep incline had me inching down on my butt. Crowds created bottlenecks and I was forced to slow down and stop on occasion. At one point I watched Bill manage to maneuver his way around a cluster of hikers while I was left behind, stuck where I was to move slowly along with the masses. I eventually caught up to him and we reached the bottom together.

Back at the car when I asked Bill to open the trunk for something I discovered a large, gift wrapped box. I opened it right there in the parking lot, it was a beautiful pair of snow shoes…and just what I wanted!

Once back on the road we reset the navigator to find a Starbuck’s, where I was gifted with a birthday drink – extra hot pumpkin spice latte; Bill opted for a Chai Tea latte. By the time we got home we were too tired to shower and get dressed for dinner so we shopped at the Whole Foods hot bar, came home and ate at the dining room table by candlelight. When I finally emerged from a long, hot shower Bill was holding a chocolate cake alight with birthday candles. He sang Happy Birthday to me and we dug in.

The rest of the night was spent on the couch watching Netflix. Another perfect way to spend my birthday…or any day.

On our way down the trail