To the top of Table Mountain

Safari over, we flew to Cape Town, checked into our B&B, walked to a neighborhood restaurant and got a good night’s sleep. We woke the following morning eager to hike Table Mountain, push our legs and work our lungs, after sitting for the majority of the previous week. Buying a two-day pass for the hop on-hop off city tour bus, ear buds supplied to hear prerecorded messages as we drove by landmarks and tourist spots, we caught the red bus, which dropped us off at the visitor’s center of Table Mountain. Walking past the seemingly endless line for the cable car, along the side of the road leading to the Platteklip Gorge trailhead, we stopped frequently to take in the view and snap photos of the unfamiliar plants and trees. 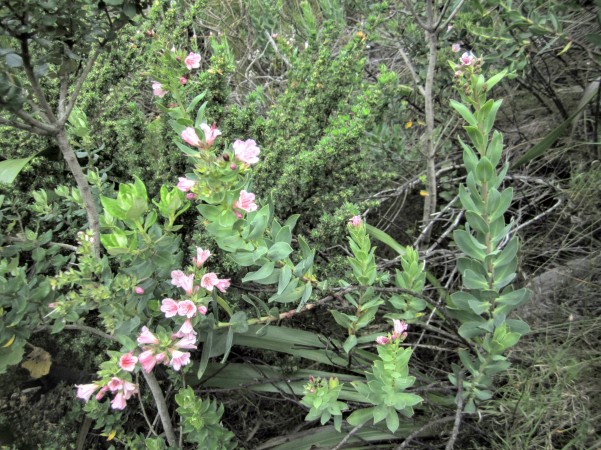 looking out from along the road at Table Mountain

It’s spring in Cape Town, the weather was cool; we wore our lightweight hiking pants and layered short-sleeved wicking shirts under long sleeves. The sun alternated shining through the clouds and hiding behind them. The trail is steep and relentless. We climbed up and higher, stopped to catch our breath and drink from our water bottles.

We passed hikers resting, others heading down.

“It’s all lungs up, all knees down,” one woman, hiking with her family, said.

A young couple ran past us, their feet springing off one boulder, landing on another, only to bounce off it again.

It felt good to push my body, to exert myself, to sweat. I’d felt sluggish at first but soon hit my stride. 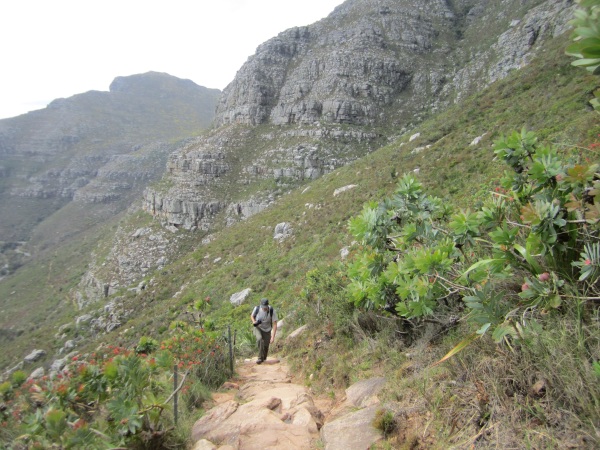 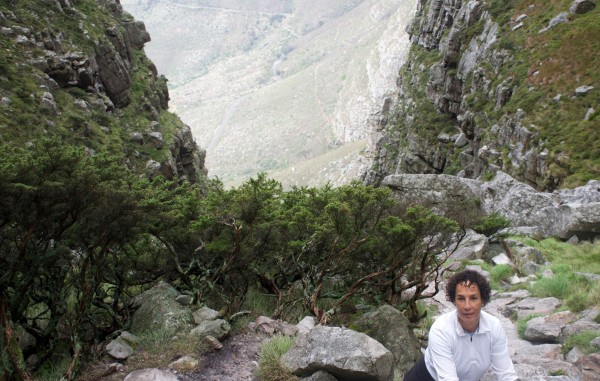 We scaled the last stretch, through the gorge, and reached the summit. At the top, trails led in several directions. Bill and I walked as close to the edge as we could in one direction before turning to explore the opposite end. It was easy to spot the people who’d taken the cable car up, women in leather pants and short skirts teetering on high heels and fresh-faced men in slacks and street shoes. 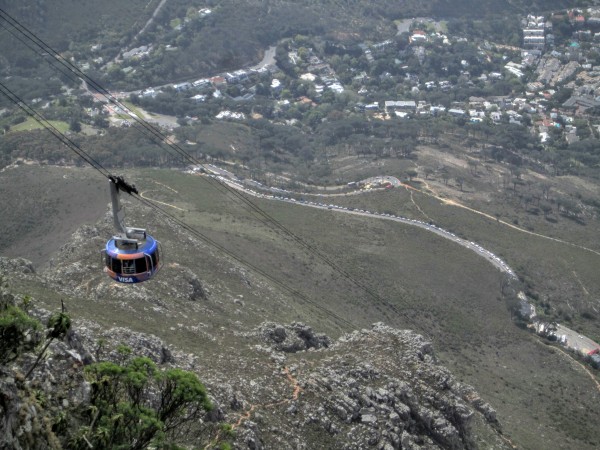 We took our time walking along the mountain top and gazed down to where our hike had started, far below. Clouds drifted by, at times obscuring part of the mountain. We found the general neighborhood our guest house was in, realized it was only a longish walk away, which we planned on doing when we hiked Lion’s Head later in the week. 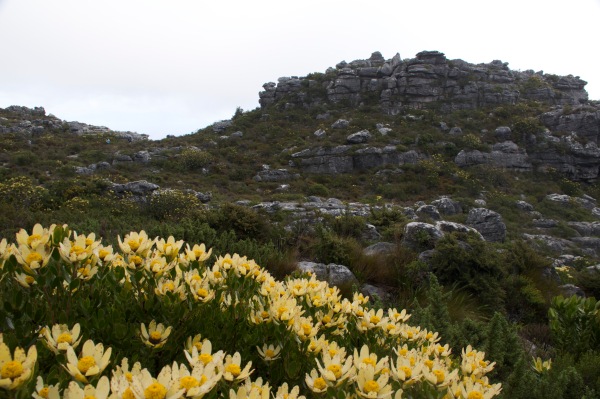 After taking photos from every angle we hiked down the way we had come up. We were careful, some of the rocks were wet and slippery. It was late afternoon and we were surprised people were still heading up. They were either going to be hiking in the dusk, maybe even dark, or taking the cable car down. We heard a group of students before we saw them. They were rowdy in a friendly way, asked if we’d taken the cable car up. One boy seemed surprised when we told them we had hiked up. We wished them well and continued down, knowing our knees would bear the brunt of the burden.